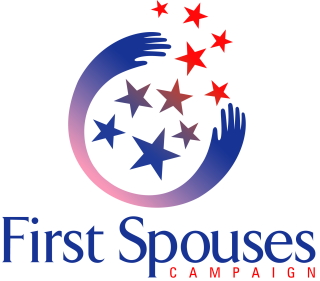 The First Spouses Campaign is an initiative by the Safe America Foundation to involve First Families throughout the United States and its territories in encouraging emergency preparedness.

In a world that seems more divided than ever before, First Spouses are often the most well-liked and respected civic leaders in a community. These attributes make them a natural spokesperson for communicating the value of planning and practicing preparedness amongst the citizens of their state.

Through this engagement the Foundation hopes to achieve two goals:

Specifically, the initiative asks First Ladies and Gentlemen to:

Highlights from the 2010 program include a stadium texting drill at the West Virginia University vs. Marshall University football game, led by then-First Lady Manchin.  Other key features were ads in USA Today and on ION Television Stations in key cities nationwide, featuring Mrs. Manchin encouraging individuals to “text” in an emergency. First Lady of Kentucky, Jane Bashear, issued a proclamation supporting Safe America’s Drill Down for Safety Campaign, while other First Spouses carried out their pledge to drill.

In 2011, Puerto Rican First Lady Lucé Vela was selected to be the Campaign’s new Chairwoman. In this role, she helped lead and organize preparedness drills in Puerto Rico; recorded Spanish and English language Text First. Talk Second Public Service Announcements; and represented the Safe America Foundation at the 2012 National Governors Association (NGA) Winter Meeting. Another noteworthy development was the participation of the National Foundation for Women Legislators in promoting the goals of the First Spouses Campaign.

By continuing your browsing on this site, you agree to the use of cookies to offer you content and services tailored to your interests.
Cookie SettingsAccept
Manage consent

This website uses cookies to improve your experience while you navigate through the website. Out of these, the cookies that are categorized as necessary are stored on your browser as they are essential for the working of basic functionalities of the website. We also use third-party cookies that help us analyze and understand how you use this website. These cookies will be stored in your browser only with your consent. You also have the option to opt-out of these cookies. But opting out of some of these cookies may affect your browsing experience.
Necessary Always Enabled
Necessary cookies are absolutely essential for the website to function properly. These cookies ensure basic functionalities and security features of the website, anonymously.
Functional
Functional cookies help to perform certain functionalities like sharing the content of the website on social media platforms, collect feedbacks, and other third-party features.
Performance
Performance cookies are used to understand and analyze the key performance indexes of the website which helps in delivering a better user experience for the visitors.
Analytics
Analytical cookies are used to understand how visitors interact with the website. These cookies help provide information on metrics the number of visitors, bounce rate, traffic source, etc.
Advertisement
Advertisement cookies are used to provide visitors with relevant ads and marketing campaigns. These cookies track visitors across websites and collect information to provide customized ads.
Others
Other uncategorized cookies are those that are being analyzed and have not been classified into a category as yet.
SAVE & ACCEPT